Home > Hotels in Yercaud > Places to see in Yercaud

Places to see in Yercaud 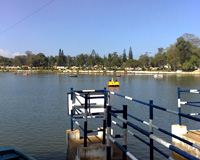 Yercaud is a hill resort that lies in the Shevaroy Hills in the state of Tamil Nadu. It is a less expensive place and is also referred as "the Poor Man's Ooty". This hill station is nestled among the picturesque coffee plantations and thickly forested slopes. Yercaud has a pleasant climate and attracts a lot of tourists from everywhere. It offers numerous tourist attractions. Few of them are listed below.

Yercaud Lake
This is a scenic lake wrapped in the lush greens and the mystical woods of Yercaud. The lake is at its full bloom during the month of May when the Summer Festival is organised. Boats are available in two options. The paddling ones for a couple or four people and the 4-seater row boats.

Anna Park
This is a beautiful park situated near the Yercaud Lake. It has a wonderful garden which is ideal for kids. There are few other parks nearby such as Lake Park, Gandhi Park, and Children Park which are worth a visit.

Lady's Seat
Lady's seat is the name given to a cluster of rocks on the south west side of Shevaroy hills that overlook the Ghat road and Salem town. Tourists can have a panoramic view of the plains below with the help of the telescope mounted at the place.

Pagoda Point
Pyramid point or Pagoda point is a viewpoint located on the eastern part of Yercaud hills. It has four piles of stones arranged in the shape of a pyramid. It is believed to be built by the local tribes and now there is a Rama temple situated between the piles of stones. This point offers a detailed view of the town of Salem and a little village called Kakambadi.

Killiyur Falls
This is an interesting and stunning waterfall located about 3 km away from the Yercaud Lake and is best seen after the South West monsoon or the North East monsoon. It is a 300 feet high waterfall with an attractive ambiance.

The Grange
The Grange is a castle built in 1820 by the then District collector of Salem, M D Cockburn and is considered as one of the oldest buildings in Yercaud. It is also the first commercial plantation area for coffee, oranges and apples in Yercaud.

Bear’s Cave
The Bear’s cave is located in a private coffee estate near the Norton Bungalow, on the way to Servaroyan Temple. There is a huge cave formation beside this coffee estate bungalow that was considered to be home for the bears. It is an important tourist place as it is believed to be one of the six abodes of Lord Subramanya.

Shevaroy Temple
Shevaroy Temple is the highest point in Yercaud and is situated at a height of 5,326 feet. It is dedicated to Lord Shevaroyan and is famous for the annual festival held usually in the month of May. It features a 7-day exhibition of flower shows, dog shows, boating races and a village fair.

Montfort school
This is one of the well established residential boys school in Yercaud and was started in the year 1917 by Bro. Denis. This school has an impressive architecture and is built entirely with exquisite stones, featuring beautiful gardens. It is a perfect example of Franco-Indian building style. It also has a zoo which is open to the public only on Sundays.

Botanical Garden
Botanical Garden features a large collection of rare and endangered species of plants including the pitcher plant and the famous kurinji flower which blossoms once in 12 years. The garden is also home to the National Orchidarium which is ranked as the third largest of all the orchidariums in India. It has a collection of over a hundred species of orchids, of which about 30 are exclusively found here.